Impact of the 2020 pandemics, climate ambitions and trajectories (December 2020)

Comparison of the climate and covid-19 pandemics (July 2020)

Animation: one year of Arctic sea ice as simulated by a numerical model (February 2019)

On October 1st, I was officially appointed Research Associate of the FNRS, a position that allows me continuing my research on seasonal to decadal climate prediction. You can find more details on my research project here:

Interview at the national news TV (RTBF) on the navigability of the Arctic Ocean (February 2018).

The SIPN South project is on track! (November 2016)

I am leading the SIPN South project (http://acecrc.org.au/sipn-south/) that aims at better understanding the skill and value of environmental forecasts in the Southern Ocean.

Interview at the national news TV (RTBF) on the 2016 record in global mean temperature.

Interview by De Morgen (November 2015) on a year of records

The Arctic sea ice Outlook June report is out (June 2015)

31 groups worldwide participated to this effort. Look at the executive summary and my contribution here.

The Arctic sea ice Outlook June report is out (June 2014)

28 groups worldwide participated in the Arctic sea ice outlook this year. The aim of the experiment is to predict pan-Arctic and regional sea ice conditions in September 2014.

The report can be found here. Together with my colleagues Antoine Barthélemy, Thierry Fichefet and Hugues Goosse, I participated for the second time in this experiment. Our predictions are obtained from ocean--sea ice simulations driven by atmospheric reanalyses. Below is a figure showing the predicted evolution of 2014 Arctic sea ice extent, and the bias-corrected estimate of sea ice extent. You can find more about our participation here.

I defended my PhD thesis, entitled "Evaluation and improvement of climate simulations of sea ice" this Friday 25th of April 2014.

You can find the PDF of the thesis here.

You can find a video of some parts of the presentation here (in French).

You can find the slides of the presentation (in French) here.

You can find a summary of the thesis here. (French: here).

My thesis dealt with the joint use of models and observations to better reconstruct the sea ice state, or predict its future evolution

(Video recorded at the occasion of the SIPN Workshop in Boulder, CO, 2-4 April 2014). Link not working? Try here. 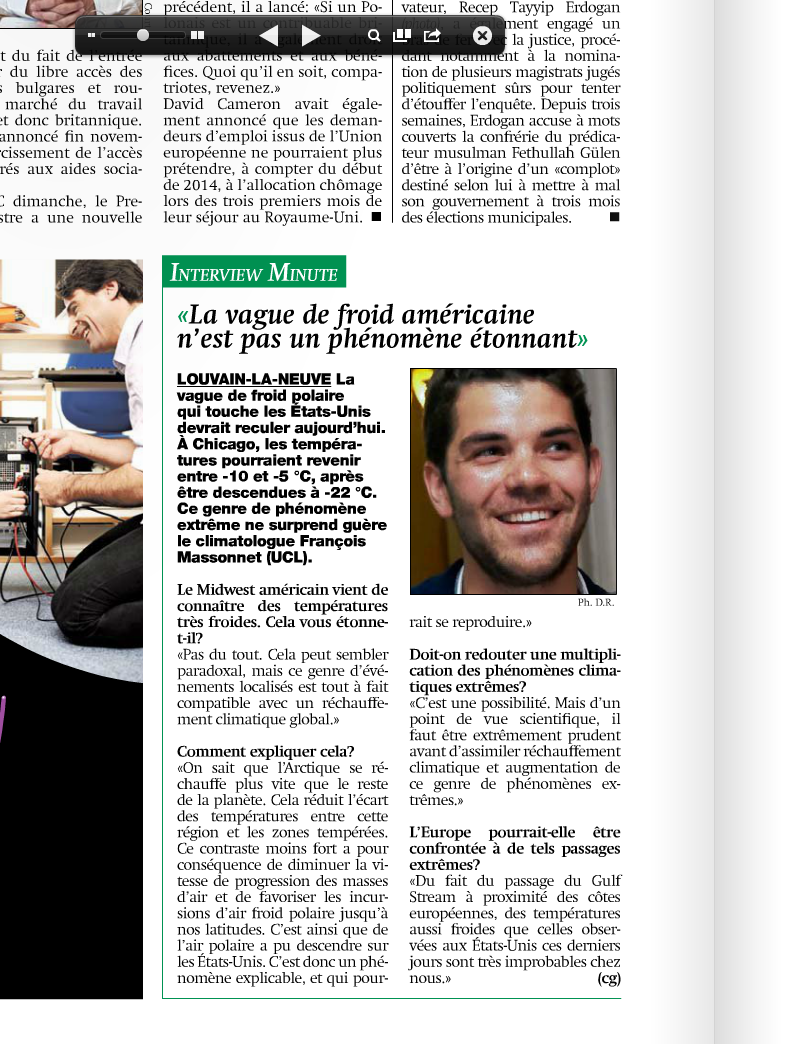 We produced a multidecadal reconstruction of sea ice in the Southern Ocean (Massonnet et al., 2013).

The data is public and can be retrieved from here. 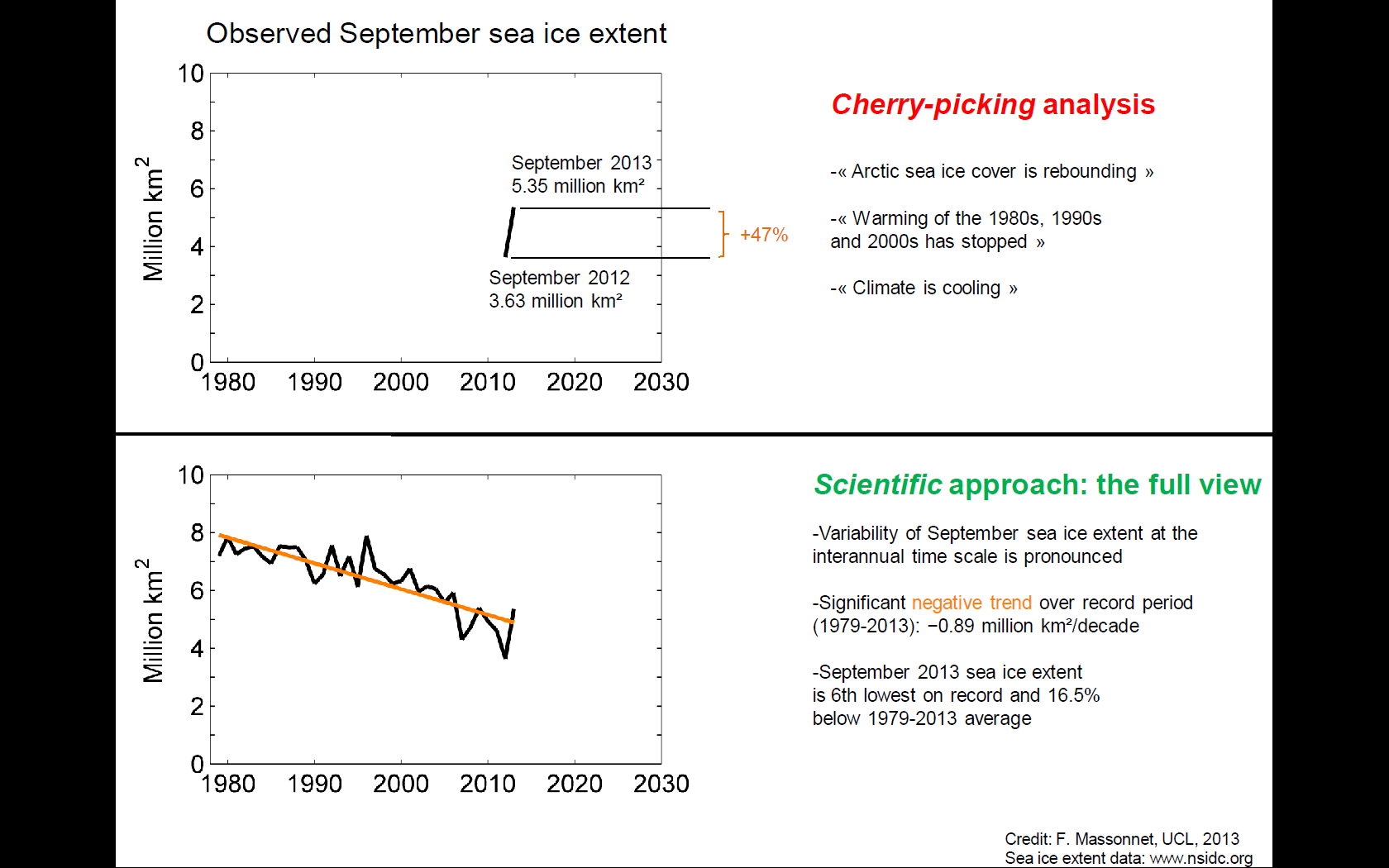 For more data, you can send me an e-mail or have a look at this README

Visualisation of the EnKF (April 2013)

In the animation below, I estimate a state-vector subject to linear advection on a periodic domain. This example was proposed by G. Evensen in his reference book.  I think it is a great insightful gate to understand the basic principles of (ensemble) statistical filtering.

The problem: Suppose we would like to estimate some physical property transported in a flow. For example, we may want to estimate the air temperature at ground level on the 50°N latitude circle (Brussels). In our simplistic example, temperature is simply advected eastward with a constant velocity of 1 m/s.  For our purposes, we will assume no thermodynamic processes at stake, so that the problem is that of pure advection. Can we accurately estimate the temperature profile at our latitude band?

The exact solution is displayed as the red curve, but is hidden to us. One piece of information comes from sparse measurements at two distant stations. Two such measurements are available every ~2.5 day (every 5th time step), and the variance of the error of measurement is estimated to be 1°C² (the two distant measurement errors are supposed to be independent).

One approximate solution is to start from an ensemble (here, 50 members) of likely profiles of temperature. We have a priori no idea about the shape of those profiles, so we will sample them from a mean of 20°C with an assumed decorrelation length scale of 80 km (the domain length is 4000 km). This ensemble of first guess (green lines) is advected in space, and updated whenever observations are available. Because the error covariance matrix of the ensemble forecasts has some extra-diagonal structure, the correction of the forecast is active in the neighborood of observations (black dots).

Note that the example below is purely fictitious and is not related to the real temperature profile around the Earth!

Olivier back from Antarctica (November 2012)